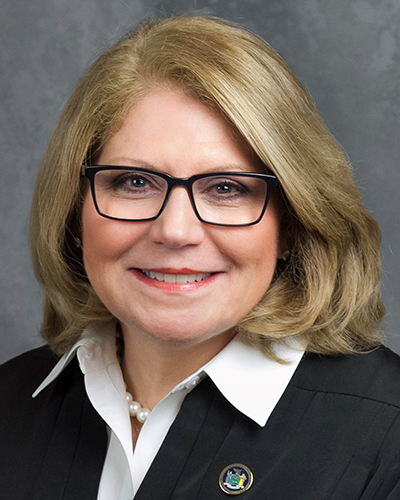 The Honorable Francesca E. Connolly is an Associate Justice of the Appellate Division of the New York State Supreme Court, Second Judicial Department, having been appointed to this position on February 23, 2016 by Governor Andrew Cuomo. She was appointed as a Justice of the New York State Supreme Court by Governor David Paterson in 2009 and was elected to a 14-year term commencing in 2010. As a Supreme Court Justice, she was assigned to Westchester County and presided over the Matrimonial Part for three years, and served as Supervising Judge for two of those years. Justice Connolly also presided over the Environmental Claims Part of the Ninth Judicial District, the Compliance Part, and an Individual Assignment Part in Westchester County Supreme Court.

Justice Connolly has lectured at numerous CLE courses, including to judges at the New York State Judicial Institute. She has authored numerous published opinions on a wide variety of legal issues. Prior to her appointment to the Supreme Court, Justice Connolly had twenty-five years experience as an attorney in complex civil litigation in state and federal courts at the trial and appellate levels and was most recently a partner at Malapero & Prisco LLP from 2003 through 2009. Justice Connolly received her B.A. from State University of New York at Albany, magna cum laude, in 1979, and her J.D. from Pace University School of Law in 1982.